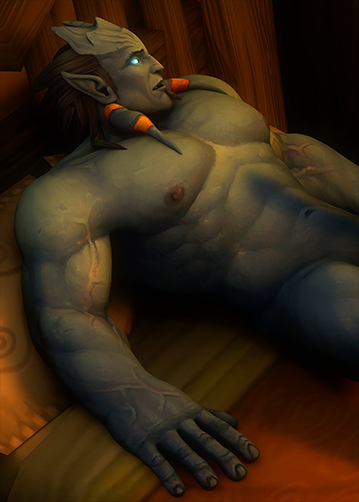 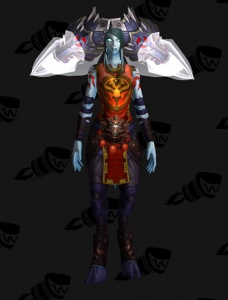 There is no pattern, this is just a collection of dabbles that I have no room for and don't have the heart to get rid of. So, here they mostly are. This is just the story dump so doesn't matter! There is no particular fandom. This is a very NSFW post, there are a lot of sexual situations, few non-consensual and particular violence. Please be advised before reading. I don't want to hurt anyone, or cause stress! Read at own risk. You have been warned. Literally my first time posting anything like this.

I have no beta reader so I'm sorry if there's mistakes. I hope you enjoy all the shit I have planned for Lana. Badly wounded and caught in a blizzard, the Forsaken mage Sarah is separated from her friend, the orc shaman Dor'ash, when he surrenders himself to a draenei paladin to protect Sarah. She tries to follow, staggering blindly through the storm as an outside will, long supressed, begins to rise up and reach out from deep within her.

She heals him because he protects her. He protects her because she heals him. The relationship between a tank and healer is a sacred one, and when the warrior becomes stressed and frustrated with his team, our inexperienced but motivated priestess wants to relieve it. Ishetii and her twin brother Falkhen have escaped Draenor and made it to Azeroth. This is their story as they try to rebuild a new life on what they hope will be their final home.

Gadgetzan is a good city to take a break in.

You never know which barrel-chested Vindicator you might run into. Vel'liir, the Draenei Paladin discovers a prisoner in Ammen Vale and rescues her. The prisoner joins him on the paladin's travels.

A mysterious string of murders in Stormwind that appear to involve demons. Missing plague stores from the Undercity. Something is coming. As the Alliance fleet approaches the Tomb of Sargeras, a nineteen year old priest, an ancient paladin, and a worgen death knight deal with the thought of impending death. The story of a priest turned paladin. Begins at the siege of Shattrath and follows his path through Azeroth.

And not all are good natured. Grimsain wrote: It is a tricky subject, what exists in game and what is within the walls of lore or logically must be does not always fit together. And supernatural, there is nothing supernatural in the warcraft world, magic, gods, demigods, chaos, order and everything in between is perfectly natural. To define truly evil is not very easy, I find it hard to paste a story on the dreanei where any part of their structure have a perfectly clear view of what is evil, how to find it and remove it.

However that is quite a different subject. Limited would be an understatement, one female form and one male I do not agree that you can take what you see as average. What you see is an average warrior male and an average "sexy" female since that is what the wast majority of the players wish to play. Very little to do with the true average of the people fitting to the lore. And it hardly even fits to the classes, the huge bulking model hardly fits a mage or priest. But where you to chose one model it would be far more profitable to have bulky mages then feeble warriors.

As for the females, within the alliance which female are the least played? The dwarfs. Not sexy enough. I would even have preferred them with beards as most fantasy stories portrait them. Thus you cant really take what you see in game as a basis of a functional lore towards any of the races, and since the goal of blizzard is not to eliminate every plothole true definitions will come very slowly or never.

All you can do is pick and discuss what is logical.


It is not logical that the models in game is the average, the wast majority of dreanei must be normal workers, they do not look like that. Well, marriage originates about 10 years ago. When humans started farming the land and the importance of possessions being inherited by the real children of the family marriage became much more important then in a hunter-gatherer society.

Thus arose as a way of controlling the females, marriage. Very little to do with love. What I was referring to with the "german bridge-fetish" was that the definition of love has not been answered by our culture with perfect precision. And within a people who live for thousands of years I am quite sure that love would take many many forms. Remove reproduction and its damn near impossible.

But one does not necessarily exclude the other. I can tell you one thing, you're looking at it in a far too meta way. Sure, meta can be fun, but if we're trying to "extrapolate" fictional race's culture, we have to use what we have. What we do have, is bulky males and slim females. What we don't have, are examples of other figures. Sure, the real world reason for it was to make both of those models "sexy", but if we're extrapolating a culture, I repeat, we have to use the elements we have, and can't add our own stuff while omitting the one that's already there.

If you just ignore those models, you don't have ANYTHING to base on, except for your own imagination - and that's when you start creating your own race, as opposed to the Draenei - who are, for all intents and purposes, what we have in game. So yes, I base my speculation on stuff that is actually there, as opposed to what I think should be there.

What I meant is, Draenei can be evil in a "greedy, corrupt bastard" way or "school bully" way, but not "evil warlock who wants to destroy the world" way - because a society which seems based on purity and goodness would get quick job of those. Look, I like to imagine what immortal or extremely long lived races would be like just like any other guy - but the stuff we were actually told is that Draenei are good people, and every Draenei NPC is like it.

When you start imagining what you think a pseudo-immortal race should be like, you're, again, creating your own creature, not the Draenei. And I don't think I want to get deep into "nature of love" debate. It can be very lengthy and controversial on its own.

What is wrong with Male Draenei? - Page 3

Let's agree to disagree on this point. We do have more, books and concept art, quite a lot of it showing other shapes and forms. Not many normal farmers, tailors or smiths but that is where we must add logic. A society can not be built only on slim sexy females and bulky warrior males, they are the minority.

That is why they are special and that is why "we" pay to play them. Most of the game is just that, a game. Built to be a game, for gamers to make the gold. Very few things fit if you start adding real lore and logic to it. Thus in game appearance is not a suitable base for building a working lore. But anyway, if i understood you correctly you said that there was a problem with homosexuality due the the big difference between the male and female. Now firstly we must ascertain that the term homosexuality is as we understand it in our world and then transferred into WoW, as we do with all other emotions, actions and reactions.

And if that is so I can only tell you that you are wrong, in homosexuality or bisexuality the differences between the sexes are completely and utterly irrelevant. Unless the differences actually is the very axis on which an individuals sexuality spins. In such a case big differences would actually "help". Yet again, this is all irrelevant. Blizzard will, as stated before, "not touch this subject with a ten foot pole". We will never get any kind of answer unless we create it our self's.

Thus it comes down the the individual player, what they wish to play and how they do it. And that has already been agreed on that common sense rules. If you want "Goldshire" head to Goldshire, if you want civil RP don't. But the shape of the in game models can never give you and answer to this, of that I am certain. I do agree that there are far less, lets call them "corrupt-draenei" depicted within the NPC population and lore in general. But they didn't make very quick work of Archimonde or Kil'jaeden and I kinda think "evil warlock who wants to destroy the world" fit pretty well on those two clowns.

They didn't see them for what they where until it was to late.